Introduction: Why do forests still exist? 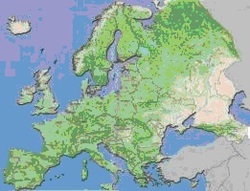 Europe and its forests
If we look at Europe from Space, through the digital eye of a satellite, we will notice a seemingly solid structure formed of vast, dark green woodland. When we compare Europe to all the other continents we realize that Europe is actually a green oasis in the world. It is an area where forests do not decrease (as in the rest of the planet) but on the contrary have increased since the XVIII century.

In Europe the the relationship between forests and society continues to evolve, turning its back on the demands for mass raw material and focusing more on the ecological aspects such as the protection and conservation of ecosystems and landscapes. There is the tendency to move away from the typical aspect of using the forest solely for timber production. This is a privilege that only a quite wealthy society such as the European can afford. In the poorer parts of the World, there is pressure for more agricultural land at the expense of forests because of the millions of starving people who use wood to survive on a daily basis.
European forests are diverse in terms of the composition of species, the land they cover and the history of their management. However, they are quite similar in terms of their role in the modern world for the landscape and society.
During our journey through European forests we will examine their diversity and we will try to discover the strong relationship between forests management and forests role in society. It will be a journey to forests in European countries and at the same time to forests of the past.

We will start our journey from the Mediterranean and we will continue towards the north according to the chronological order of settlement in Europe. We will see how the history of our economy is related to forest resources.

The first traces of settlement are 8000 years old and come from southeastern Europe, whereas similar findings in the northern part of the continent appear 6000 years later.
Oak and cedar forests died out in the medieval times (in those days people struggled for their survival). Systematic forest management by people in Western Europe dates back in the middle of the last millennium.
We will therefore follow the history of civilization and at the same time we will learn about forests which are similar to old forests and grew during the postglacial period. Let’s start our journey…