Beech (Fagus silvatica) forests are mainly located in mountains of average height, at 600m above sea level and in the lowest but colder and more precipitated Trans-Danubian regions. Today in Hungary, beech forests provide the largest wood volume and are also very important for the environment and nature protection.
Oaks (Quercus sp.) are the most typical species in the country. They form mixed forest stands with a number of other species. Hornbeam-oak forests are found on hills of average height with a characteristically closed canopy. Associations of this kind may be seen in more humid parts of the Great Plain. In their typical two-storey stands, hornbeams form the second canopy underneath sessile and pedunculate oaks.
Turkey (Quercus cerris) and sessile oak (Quercus petrea) forests are the most widespread associations, common in the mountains and hills of 250-400 m above sea level. The shrub and herbaceous layer of turkey and sessile oak forests, is usually very rich due to the light-demanding construction of the canopy of both species which lets light pass through.
Loess-oak forests (Quercus robur) – below 200 meters above sea level – are special relict forests under priority conservation of which only a few acres maintain the original marginal lowland vegetation before human intervention.

Hardwood forests, consisting of oak, ash and elm, are found in flooded areas and were developed due to the presence of water. The main species are pedunculate oaks (Quercus robur), Hungarian ashes (Fraxinus angustifolia ssp. pannonica) and the fluttering elm (Ulmus laevis) which unfortunately declines due to the elm tree disease.
The widely cultivated forest species is the black locust “acacia” (Robinia pseudoacacia) with short rotation periods which make acacia the most common species in the country’s forests. This species, native to America, was introduced to Europe hundreds of years ago. Acacias are especially important in poor soil sites, where it is often the only species that can grow. Its wood, apart from other uses, is very useful as firewood even when it is moist. Moreover, acacia’s nectar is good for feeding bees.
Climate conditions in Hungary are not the most appropriate for pine forests. Pine forests usually form single species forests. Mixed forests are only formed with Austrian pine (Pinus nigra) and Scots pines (Pinus sylvestris) which are of great importance in Hungary. We can also find spruces and larches (Picea abies and Larix decidua).  Single planted pine species are ecologically unstable, since they are threatened by pest diseases. The rapid growth of Euramerican poplars (Populus x. euramericana) – typically planted on plain or floodplain areas –facilitates intensive economic activities. Euramerican poplars are established for economic reasons (paper production) and not for protective reasons. 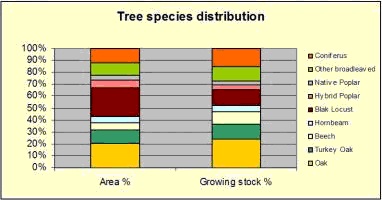 All experts agree that big game stock has exceedingly multiplied, and in some cases animals cause serious damages to forests,  mainly because of browsing. Game management should be carried out carefully so that game population does not exhaust forest resources, not damage the forest and not prevent forest development. Over the past decades, due to conservation policy, predatory mammals such as wolf, lynx, wild cat and golden jackal (Canis lupus, Lynx lynx, Felis sylvestris, Canis aureus aureus) have re-appeared in the highland forests from where they were previously excluded.

We boast about the best game trophies in the world such as fallow deer and wild boar. Also, red deer and roe deer antlers are also considered among the best in the world.