Natural and semi-natural flora occupy one third of Lithuanian territory. There are 1,795 flora species mentioned in Lithuania. Most of them (713 species) grow in forests. More than 4,000 fungus species are found in forests. There are 321 bird species, 213 of them reproduce in Lithuania.
The Lithuanian Red Data Book functions as a legal document on which the protection of rare and endangered plant, fungus and animal species is based. The Red Data Book contains descriptions of 767 species of animals, plants, lichens and fungi. 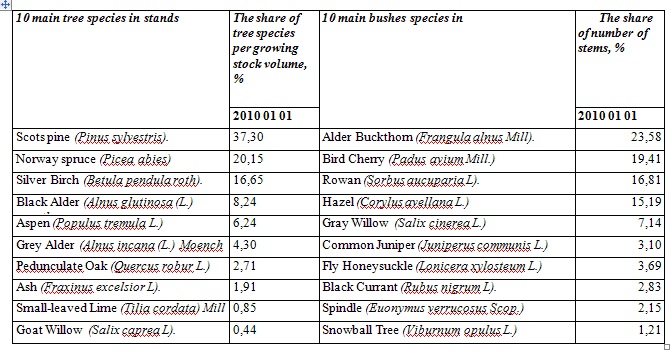 Main tree and bush species in forest stands. Source: State forest Service (NFI)
Among game animals Roe Deer (Capreolus capreolus) predominate in Lithuanian forests and open air (Table 3). One of the most popular game animals to hunt is wild boar (Sus scrofa). It is hunted not only for its meat but also for reducing the damage it can cause. Wild boar digs soil and extracts roots resulting in the destruction of crops and pastures.
Beaver (Castor fiber) is an important species supporting their ecosystem.

They create wetlands with increasing biodiversity and provide habitat for many rare species such as water voles (Arvicola terrestris), otters (Lutra lutra) and water shrews (Neomys fodiens). Beavers almost became extinct at the beginning of the 20th century, but then they started to adjust again to the environment. Beavers became common on the whole territory of the country causing more and more damage to forests and farmlands. A beaver family can fell as many as 300 trees in a single winter. Beaver population in Lithuania ranges from 100,000 to 150,000.