Nowadays forest area in Poland covers (according to 2009 data from Central Statistic Office) 29.1% of the country’s territory. Just after Second World War that percentage was 20.8%. There is a constant increase of the forest area. Regarding forests ownership, public forests are dominant (81.8%), of which state forests account for 77.8%.

Ownership status is presented below. 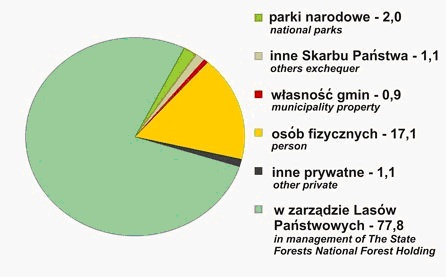 Ownership status of forests in Poland (GUS)
Forest areas are dominated by coniferous forests, covering 52.6 % of forested area, whereas broadleaved forests cover 47.4 %. Pine dominates in lowlands and in significantly richer soil sites, whereas spruce dominates in highlands and mountains.  This domination of coniferous species even on very rich habitats, often as monoculture stands, is the result of clearcutting forest management, which was very popular in the past. Clearcutting involves removing mature stands in one cut (often in big areas) and establishing new stands artificially (by planting and rarely by sewing). Stands reestablishment has been followed in Poland for the past 20 years. The same practice was applied in other middle-European countries.

The most interesting flora communities are: oak-hornbeam forests, riparian forests and alder forests.

Oak-hornbeam forests are broadleaved forests on fertile loam soil. They are often adjacent to riparian or alder forests from one side, and mixed pine forests from the other. In the tree level we can mostly find: oak, hornbeam, small-leaved lime. Hornbeam is an important forest component, nursing the upper level. In that type of forest the following species can also be found: hazel, alder, buckthorn, dogberry, and juveniles of linden, hard beam, maple, oaks. During summer forests are dark, and ground vegetation grows in early spring, before leaves appear on trees.

Riparian forests are typical of river and stream valleys. Shallow groundwater is the characteristic element of these forests. In these forests we can find: black alder, ash, singly- maple, hard beam, bird cherry and spruce.

Alder forests - In the tree level we can find alder as well as downy birch, spruce, English oak, ash, and sometimes other species. For alder forests periodic flows caused by the raise of shallow groundwater are common. In these forests, the areas that are not flooded are very important, since they allow tree growth and regeneration.
Oak-hornbeam forests, riparian forests and alder forests are most interesting in respect of flora