Switzerland is a country in the western part of Europe, with a total area of 41 290 km2. It is one of the most mountain countries in the world and does not have access to the sea. It can be divided into three parts, according to its diverse land structure: the Alps (southern, south-western and eastern parts of the country - 60 % of the country), the Swiss Upland (approximately 30 % of the country) and the Jura mountains (14 % of the country). In Switzerland we can find a lot of lakes (around 15 thousand, most of them have a glacial origin), gorges and valleys. On the Swiss Plateau there is a temperate oceanic or sea climate, while in the Alps, the Alpine climate.

Switzerland lies within the mixed forest zone where deciduous forests dominate. Forests account for 31 % of the country, 13.9 % of which are classified as being primary forests. Since the nineteenth century, the afforestated area has increased by 45%. Currently, the Swiss forest area accounts for 124.000 km2. 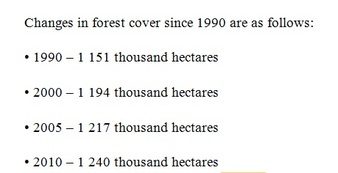 On average, it is assumed that every year, forest cover increases by approximately 0.4 %.